A stranger knocked on the door yesterday around 11 am. The anxiety I felt surprised me. The only people who knock at our door usually are the little girls from next door so it’s silly really. Anyway it was a man from Statistics NZ and we have been chosen to be visited at three monthly intervals.
He hadn’t made an appointment and was ostensibly at the door to do that. It seemed a strange time to me. How both easily suspicious and easily able to let someone through our door we can be. He wore a plastic tag but actually I didn’t look at it carefully and should have. Sometimes we are too polite. Or maybe we should take people more on trust? I can’t decide.
His visit coincides with my reading of Anna Funder’s novel, All That I Am. It is based on real events in 1933 Berlin when Hitler’s abominations began. How easily he framed the socialists for the Reichstag Fire and then imprisoned or killed anyone who might oppose him in the upcoming elections., There were no legal processes, no trials. He”passed” a law permitting arrest without warrants, house searches, he closed newspapers, and banned political meetings. The people allowed it to happen. 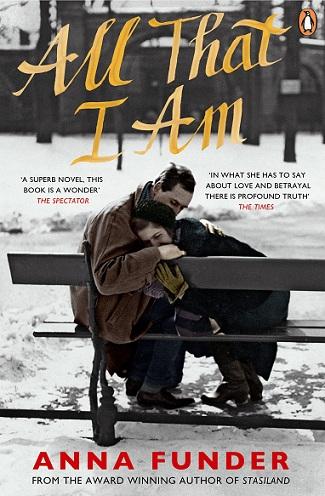 The even more amazing thing is that Anna Funder is a young Australian writer. How can she be so clever- i am so envious!
How appalling it is then that 34% of the country do not bother voting.

And as they say, the rest is history. At least 6 million people were killed under Hitler’s rule. I picture the whole of NZ and then another couple of million, gone. All the people at every rugby match, concert, every supermarket, mall, school and university. I imagine a ghost town NZ. And still it goes on. Nothing has been done about the missing girls in Nigeria, who are no doubt being raped and infected with HIV. And how can I be sanctimonious? What have I done? Nothing. Signed a petition for Amnesty International.
The thing I can’t get over in this book I’m reading is the amazing courage of the men and women. They took huge risks knowing that they could be tortured and murdered at any time. They were constantly being watched even if they were lucky enough to get out, which most weren’t. I’m scarcely brave enough to open the door to a Statistics gatherer.

But I can and will vote.

I’m grateful today for the freedom to publish what I like, read what I like, and as a woman pretty much do as I like. Nobody can tell me what I can and can’t wear, or what jobs I can or can’t do. I still feel resentful that I can’t walk about confidently in the dark or, like Blessie, walk home from my bus alone. I am still fed up that things like sport coverage is 95% male. I still feel resentful that in this day and age we don’t have equal pay. I remain very angry that we allowed Air New Zealand to play that stupid, sexist rubbish as their “safety” video. There is no place for complacency but I am lucky to have been born in New Zealand.
The poem below by Janet Frame helps me to put in context my unwillingness to really try to change big global issues and makes me feel how petty and trivial some of my concerns are. I remember when my husband died in a climbing accident, a young woman at the funeral asked me what brand of clothing my trousers were. I’d have to say it wasn’t uppermost in my mind at the time….

Smell of sweat in armpits dismays more
than the distant smell of the dead in a jungle war.
Possible and important are the blind date and alley but not
the blind man and his plight.

Heaven is curls in place
guipure over fine embroidered lace, leather
simulated, not mind membrane, human
skin woven together on an unknown face.

So let us cheer for our strange worldly wisdom in knowing
how to pack into our life’s thrilling journey
such little happinesses that keep us determinedly going
to hell and back!

And now my not quite so proficient 🙂

Stranger at the Door

A stranger came to the door to gather my statistics.
He wore a pilled jumper and carried a plastic identity card.
I let him in and now he has my name, my age, my income,
And he has stored them in his computer and taken them away.

How will he use my information? Or was he just the messenger?
Will it keep the wolf from the door or has he now the scent of me?
He has my number, though he did not have the appearance of a murderer.
I might have been wearing a touch of red.

He went off-script, his old mother likes to write.
I kept my responses short and dishonest, blunt and abrupt.
I stood and opened the door. He knows where I live.
Perhaps I should have been kinder about his mother.
My aim is not sharp.

Have a good week. FG